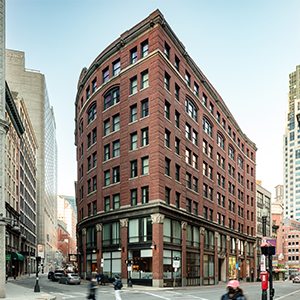 There aren’t many companies moving into downtown Boston these days.

The global design firm, long headquartered in Watertown, said Friday that it has signed a 16-year lease for a new home at 110 Chauncy St., an eight-story office building on the border of Downtown Crossing and Chinatown.

It’s a partnership with MC Real Estate Partners, which closed Friday on a deal to buy 110 Chauncy for $27.8 million, according to Suffolk County property records. Sasaki will help redesign the 120-year-old building and occupy its 64,000 square feet.

The firm had been seeking a new home, for several years, said Liz von Goeler, Sasaki’s head of external relations and a principal for workplace design. It had just about given up when it heard about potential design work from MCRE, which was trying to acquire the building. Sasaki was attracted to the building’s turn-of-the-century bones and classic marble staircase, and decided to join the project, not just as architect but as an occupant.

“We kind of fell in love,” said von Goeler. “There’s something really special about this space.”

Having Sasaki as a tenant helped MCRE, a small New York-based firm that also owns buildings in the Leather District and Cambridge’s Central Square, to land financing and close on the purchase, said managing principal Steve Grant. It plans to start renovation work this spring and move Sasaki and its 250-plus employees in sometime next year.

Despite the currently ghostly sidewalks, and office vacancy rates that are the highest they’ve been in a decade, Grant said he’s bullish on downtown Boston, even on older “Class B” buildings that need investment in the sort of modern HVAC systems and common spaces that many tenants say they’ll prioritize after the pandemic. He worked in New York City after 9/11 and saw how quickly Manhattan’s office market rebounded.

“There were very legitimate fears, that a few years later were completely gone,” he said. “Our belief is that the pandemic, too, will subside, and that the notion of working from home is a very temporal idea.”

Sasaki — which, it’s worth noting, is in the business of designing urban space — agrees. It does better work when its people are in the same room most of the time, von Goeler said. And having outgrown its building in Watertown — which Sasaki is selling to developer Berkeley Investments for conversion to lab space — the firm had been looking for a place to better network with clients and recruit talent.

“We want to be accessible to everyone, to bring in the best talent and be able to connect,” von Goeler said. “Being in the western suburbs is not that.”