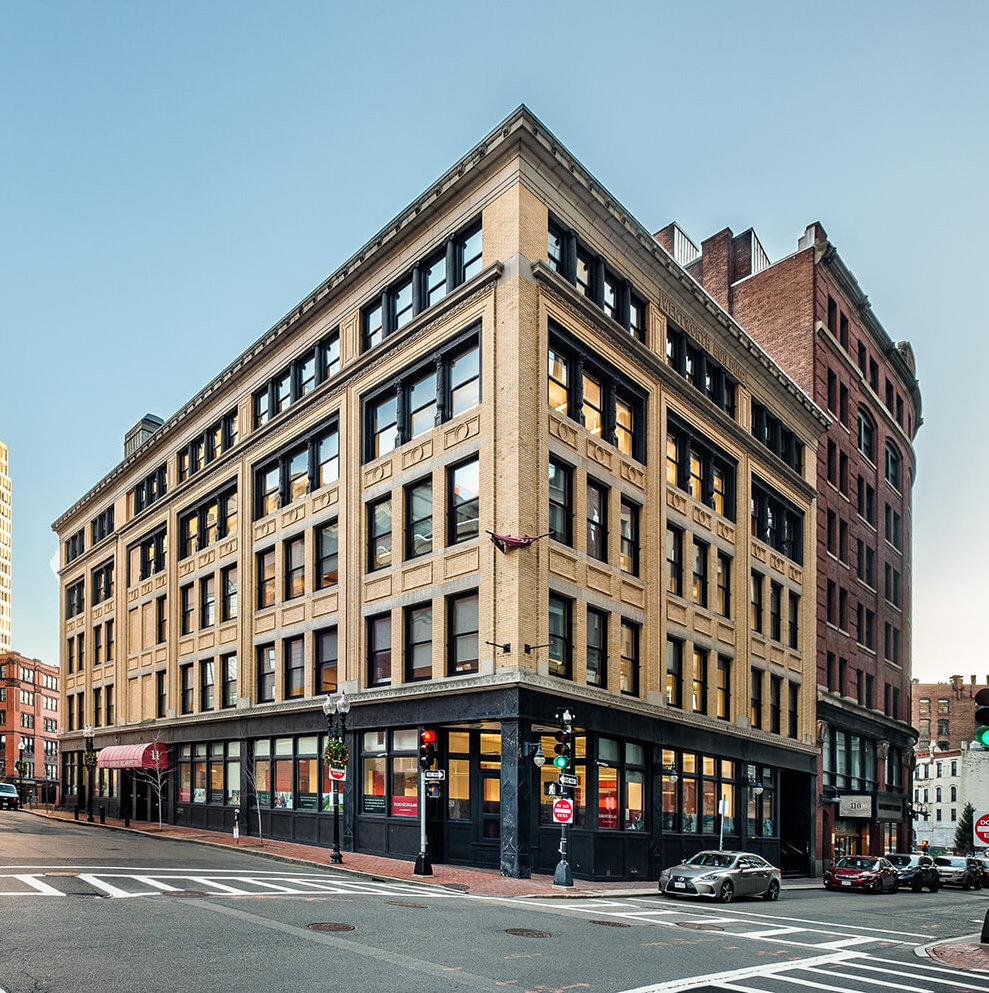 BOSTON — Broker CBRE pretty much had them at ‘Hello,’ but more was required than “good symmetry” and a sunshiny view of brick-and-beam CRE for MC Real Estate Partners to toast yesterday’s $23 million all-cash purchase of the enduring 11 Avenue de Lafayette barely a month after buying adjacent 110 Chauncy St. and thinning an uncertain malaise lingering over Greater Boston’s office sector in a post-pandemic limbo.

“It was a pretty competitive process,” MCRE founding principal Andrew Nathan recounts to Real Reporter in confirming his company’s successful joint venture with Taconic Capital Partners outlasting other suitors vying for the 57,000-sf retail/office structure that dates to 1899. Yesterday’s sale/leaseback with longtime owner Elderhotel Inc. was separate from the $27.8 million mid-March deal where MCRE purchased 110 Chauncy St. and revealed globally known design firm Sasaki will relocate to the 76,000-sf urban address after decades in suburban Watertown. The architectural firm is redesigning 110 Chauncy St. to new millennium standards, and Nathan explains the same plan is on the drawing boards for 11 Avenue de Lafayette where Sasaki will re-imagine the lobby and other common spaces.

“We liked this building on its own merits, but we do feel there is a good symmetry to what we are trying to do next door,” says Nathan. “We believe combining the availability for lease and repositioning of (both buildings) will establish a hub for top design and creative office users in downtown Boston.” Sasaki itself should inspire some of that constituency to consider the properties, according to Nathan, who further maintains the “character” of vintage 11 Avenue de Lafayette also syncs up with those sort of users.

“It has very good bones with a lot of character,” he says of the structure, contributing elements to that outlook including generous window lines providing natural light plus an efficient layout with floorplates larger than typical Class B product, a sector which became an unexpected darling among many new-age companies during the 2010s, and Nathan opines that tenants will continue to embrace their scale and old-world allure going forward despite what would seem to be a trickier format for social-distancing.

Joined by co-founder Steve Grant, Nathan says MCRE’s participation in markets from Boston to Washington, D.C. indicate scant hesitancy among tenants in that regard, and that view appears to be resonating among investors who did apparently find inner beauty in the 11 Avenue de Lafayette opportunity. “The view overall is positive,” says Nathan, adding that tenant interest is already stirring over the firm’s latest investment in which Elderhostel, aka Road Scholar, will lease back one floor in the building, or approximately 17,000 sf, freeing up 40,000 sf for other denizens.

MCRE would certainly seem qualified to forecast emerging trends with a particular pedigree of capturing the feel locally after more than 15 years of its principals taking on similar Class B endeavors, originally through Nathan’s Meritage Properties whose Beantown resume dates back to 18 Tremont St., a 202,000-sf landmark asset near Government Center purchased in April 2005 for $37.6 million then harvested in October 2007 for $49.5 million. The 153,000-sf Tower Point office building in South Boston was secured for $32 million in October 2008 and divested to Davis Cos. five years later for $43 million while another turnaround involved 711 Atlantic Ave., a 99,000-sf, six-story gem barely a brick’s throw away from 110 Chauncy St. and 11 Avenue de Lafayette which Meritage bought in May 2012 for $28 million and traded in August 2015 at a consideration of $43.0 million.

MCRE was also in Greater Boston pre-pandemic, with the firm buying 485 Massachusetts Ave. in Cambridge and Boston’s 201 South St., around the corner from 711 Atlantic Ave. Tishman Speyer alums Grant and Nathan joined forces in 2019 to form MCRE, with Grant having founded ClearRock Properties.

This is Taconic Capital’s first entry in metropolitan Boston. The global institutional investment firm which has offices in New York City, London and Hong Kong is led by former Goldman Sachs partners Ken Brody and Frank Brosens. Overseeing $8 billion in total assets under management, Taconic’s CRE portfolio has $2.6 billion of investments, of which 36 million sf is comprised of office and industrial product on top of 23,500 hotel keys and 22,500 multifamily units.

According to Nathan, MCRE has yet to name a leasing agent for 11 Avenue de Lafayette and is also mulling financing possibilities after acquiring the property sans debt.