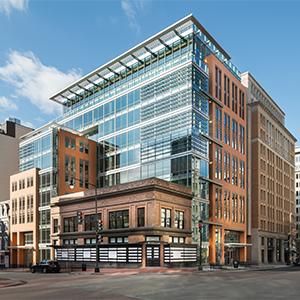 Venture Buys 1000 F St. NW in One of DC’s Largest Office Deals Since Start of Pandemic

A newly launched firm out of New York City has closed on a fully leased office building in downtown Washington, D.C., in one of the largest sales in the nation’s capital since the start of the coronavirus pandemic in late March.

MC Real Estate Partners, in a venture with an undisclosed international family office, this week acquired 1000 F St. NW in D.C.’s East End for a little more than $105.8 million from Douglas Development. The deal comes out to nearly $1,123 per square foot, becoming the first D.C. office building over 50,000 square feet to break the $1,000 per-square-foot barrier in over a year.

The deal offers a spark of hope in a downtown D.C. office sector that has seen little in the way of large-scale transactions amid the health crisis. With the majority of employees working from home and a barrage of companies looking to trim what are now bloated office footprints to reduce overhead, office demand has cratered. In the East End, D.C.’s top office market, sales volume is on pace to fall below 2009 levels, the final year of the Great Recession, and is on track be the lowest recorded total since the late 1990s.

But with the rollout of several vaccines and workers largely expected to return to the office over the next year, the 1000 F. St NW deal could lead investors to find their way back into a market that perennially has been one of the strongest for office sales in the country.

“It’s one deal, but it’s an important one,” said Chris LeBarton, CoStar’s managing analyst. “So much of the market’s recovery, and for the sector as a whole, is a psychological component.”

LeBarton said he still expects 2021 to be a difficult year for the office market, but “this is what you’d want to see.”

The founders of MC Real Estate Partners know the market well. Andy Nathan and Steve Grant, former senior Tishman Speyer executives that launched MCRE last year, have been active in the Washington area for 25 years. Nathan is also the founder of Meritage Properties, while Grant co-founded ClearRock Properties prior to launching MCRE.

The acquisition is the firm’s second in the wider D.C. area after acquiring the Executive Plaza in Rockville, Maryland, last year for $64.75 million. The company now owns more than 1 million square feet across nine properties in the Washington, New York and Boston markets.

The 1000 F St. building is a glass-clad, 11-story, 94,273-square-foot structure that is fully leased to a tenant roster that includes financial services company First Data Corp. and the headquarters of the Recording Industry Association of America. The property also sports street-level retail space leased to Sephora and GRK Fresh Greek. The average weighted lease term at the property is more than 12 years.

Douglas Development completed the project in 2016 on one of the last underdeveloped sites along the F Street corridor. The building sits three blocks from Capital One Arena and the Metro Center station and incorporates a two-story, designated historic structure at the corner of 10th and F streets.

“The property has all a tenant could ask for — dramatic ceiling heights, boutique floor plates, private terraces on five floors and terrific access to mass transit and area amenities,” Nathan said in a statement. “This is simply an outstanding long-term investment.” MCRE assumed $75 million in existing financing through Pentagon Federal Credit Union. Eastdil Secured represented Douglas Development in the sale.